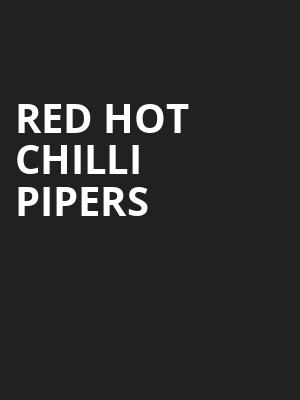 They're so much more than just a great pun...The Red Hot Chili Pipers are bringing the bagpipes right up to date with their unique blend of traditional pipe tunes and contemporary and classic rock songs. The Scottish ensemble, which can feature close to twenty players, have amassed a huge following through their covers of tracks by Deep Purple, Jimi Hendrix, Avicii, AC/DC, Coldplay and many more.

Formed in Scotland in 2002, the group first hit the big time in the UK when they won the BBC talent show When Will I Be Famous. Since then they've been awarded the prize for Scotland's Best Live Act (Twice!), performed for The Queen and played sell-out tours around the world.

You may be required to wear a mask during this performance. Please contact the venue directly for more information.

About Ames Theater: We are an independent show guide not a venue or show. We sell primary, discount and resale tickets and prices may be above or below face value.

View all times and dates

Sound good to you? Share this page on social media and let your friends know about Red Hot Chilli Pipers at Stephens Auditorium.

Keep up to date

I want email news and updates for events in my area! Read how we protect your data.